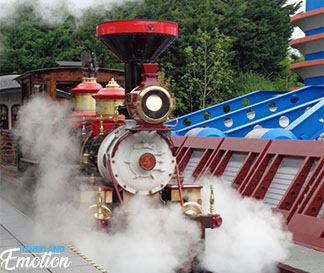 At the end of April, we offered you a first episode of « Trains of Happiness », based on the family origins of Walt Disney’s passion for railways. So here we are, today with a second opus, dedicated to the Disneyland Railroad and its four trains. So follow us, here we go!

The design of Parisian happiness trains

Like all other parks around the world, Disneyland Paris also has its steam trains. Starting from Main Street, they make a complete tour of Disneyland Park and offer a view of its expanse. There are four, each with their own name and their own theme, always related to the history of America. Their design is based on their Californian namesake but revisited and adapted. The Imagineer, Eddie Sotto has, for this, visited several American museums, including this Chicago that Walt had discovered in 1948.

Each vehicle is made up of an « American » type locomotive followed by a wagon containing the water and fuel necessary for its operation. Each of its 5 cars can take around fifty passengers to the land of magic. Tony Baxter, the Imagineer, decided to innovate, placing the seats, not one behind the other, but in a « U ». Turned outwards, all travelers are facing the fabulous scenery that litter our 5 magnificent Lands. Let’s discover the personality of these magnificent means of transport.

The four Trains of Happiness of the French Railroad

Even if it was designed the first, by Eddie Sotto, this train bears the number 3. Its decoration is very neat and at the height of the illustrious President, whose name it bears. There are superb stained glass windows and very strong symbols such as the eagle or the stars.

Colonel Cyrus Kurtz Holliday, founder of Walt Disney’s well-known Santa Fe Railroad, gives its name to the number 2 locomotive. It is also the surname of Disneyland’s very first steam engine in California. Its Style is very Victorian, with its copper lanterns and light colors.

The number 1 locomotive is so named in homage to Buffalo Bill, born William Frederick Cody. She is the direct heir to Lilly Belle, the machine built by Walt in his garden and which recalled the first name of his wife Lillian.

Fourth and last born, this train uses a Greek term, meaning « I have found », for two reasons. It recalls on the one hand, the famous word of Archimedes discovering the thrust, on the other hand the cry of the pioneers during the Gold Rush. Fans of « The Little Mermaid », meanwhile, can imagine that it comes from the name of the gull friend of the princess.

When the park opened in 1992, the Railroad had only three vehicles and three stations, Main Street Station, Frontierland Depot and Fantasyland Station. Its success earned it, the following year, a fourth station at Discoveryland and another convoy. This was a good thing because even today, it allows us to have more trains, to our greatest happiness!